Ask ONE Championship’s three newest stars about the difference between the UFC and ONE, and you’ll get three different answers — but the respect found in their new home seems appreciated by all.

Los Angeles, CA — “It’s a different mindset, as far as outcomes of fights in Asia.” That’s how former UFC lightweight champion Eddie Alvarez explained the difference between fighting in Asia, and his old home in the UFC in North America. Alvarez would know. One of a trio of big signings by ONE Championship late last year, ‘The Underground King’ is the lone fighter of the three to have competed in the east.

Speaking at ONE Championship’s open workout in L.A. on Tuesday, Alvarez added that “the way the fighter fights is applauded, versus the outcome of the fight itself.” For a man known for some thrilling wars, that’s no doubt a plus.

Asked the same question — the difference between ONE and the UFC, essentially — flyweight great Demetrious Johnson added that “one thing that we have in ONE Championship that we don’t have in the UFC, when you look at Rich Franklin, Miesha Tate, Chatri, and the long list of people behind running this whole company, they’re lifelong martial artists.  So they have empathy for the fighters, they understand what it’s like to be a fighter. They can walk in our shoes.”

Plus, “ONE Championship is not just focused on mixed martial arts. It has other avenues of martial arts, like kickboxing, Muay Thai, submission wrestling, they’ve had a world title fight in boxing as well. I think it brings more fans from different perspective[s] of art forms.”

“That’s the big thing, everybody has respect for each other, that’s the major difference,” he finished. That got some applause from those in attendance, including Alvarez, and smiles from Johnson. Dana White, take note. 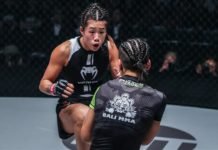