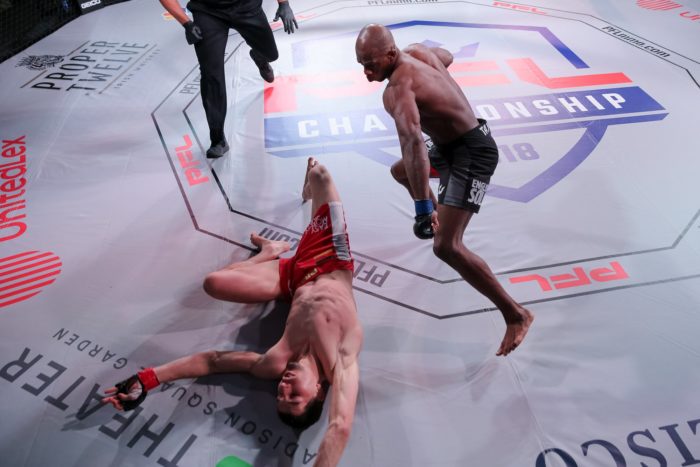 Louis Taylor changed his life in just 30 seconds at PFL 11, knocking out Abus Magomedov with the first punch he threw, taking home the middleweight title and a million dollars.

The first of six title fights at PFL 11 is between Louis Taylor and Abus Magomedov for the middleweight belt. Louis Taylor was a title challenger for WSOF’s middleweight gold, owning a 2-1 record in the promotion. He went on to go 4-0-1 this year in PFL, stopping one opponent. In the tournament, Taylor defeated Rex Harris by decision, then fought to a draw with UFC veteran John Howard. Taylor moved on based on the tiebreaker rule of whoever won the first round of the fight.

Magomedov took the center of the cage with a pair of kicks to the body. Taylor faked a punch, then had a leg kick checked. He then leapt in with a left hook and Magomedov was out on contact! Incredible start to the card with the fight lasting just over 30 seconds.

Louis Taylor was presented with his million-dollar check and proclaimed to his wife and kids that their house payment and education is taken care of. He thanked PFL for the financial opportunities and allowing him to provide for his family.