The names Gracie and UFC go together like peanut butter and jelly, and it seems the promotion has a Gracie family member among its ranks for the first time in years.

It appears there’s a Gracie in the UFC once more. ESPN was first to report that Kron Gracie has signed with the promotion, ending weeks of speculation. The son of Rickson Gracie will enter the octagon for the first time in January at UFC 233, where he will face ‘Bruce Leeroy’ Alex Caceres.

Gracie (4-0) is one of a handful of Gracies still competing in MMA, including Neiman and Khonry (son of Royce Gracie) over in Bellator. Renzo Gracie also entered the cage this year, submitting Yuki Kondo under the ONE Championship banner. Yet it has been a few years since a Gracie entered the octagon. Rolles Gracie fought back at UFC 109 in 2010, while Renzo fought a few months later at UFC 112. A couple of years later, Roger Gracie had a single fight in the organization after they acquired Strikeforce, losing to Tim Kennedy. Roger was subsequently released, and signed with ONE Championship.

Kron, meanwhile, has been fighting for RIZIN Fighting Federation in Japan. Winning three of four career fights in that promotion, he holds wins over Hideo Tokoro and Tatsuya Kawajiri. He has not competed in MMA since December 2016 however.

Alex Caceres (14–11 (1)) will enter the fight off a win over Martin Bravo at the TUF 27 Finale earlier this year. 4-3 since returning to featherweight, he has earned two Fight of the Night bonuses in that span.

Here’s to hoping he’s been working on his ground game. UFC 233 takes place January 26 at the Honda Center in Anaheim, California. 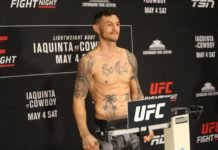 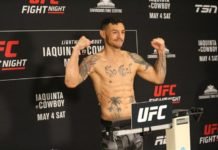 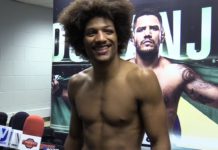