Emmanuel Sanchez has his next opponent set, as he will welcome Ashleigh Grimshaw to Bellator when the promotion returns to Thackerville, Oklahoma next year.

Fresh off an exciting but ultimately losing effort against Patricio Pitbull for Bellator’s featherweight title, El Matador already has his next date booked. In a press release Friday, promotion officials announced that Emmanuel Sanchez would face new Bellator signing Ashleigh Grimshaw in March 2019 at the WinStar World Casino and Resport in Thackerville. The venue played host to Friday’s Bellator 210.

Sanchez (17-4) was on a four-fight win streak prior to facing Pitbull in an excellent, hotly contested battle at Bellator 209. With wins over ex-champs Daniel Straus and Marcos Galvao (ex-bantamweight champ), he remains a top player in Bellator’s 145lb division. His aggressive nature and tendency to push the pace will pose problems for many in the weight class.

In other words, it’s a big assignment for newcomer Ashleigh Grimshaw. Grimshaw (20-10-1, 3 NC) has won four straight, and has been a staple of the European scene. He’s one of a number of talents from across the Atlantic that Bellator has picked up of late. At 36, ‘The White Wolf’ has competed in Cage Warriors and BAMMA, among other promotions, but will be getting a considerable step up against Sanchez in March.

No other bouts were announced for the card in Friday’s press release. The event takes place March 22, and will air on both Paramount Network and DAZN. 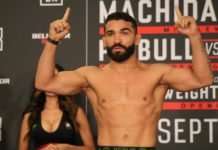