Mike Perry’s arm isn’t broken after UFC Denver, as was first thought, but he’ll require an MRI to determine the extent of any ligament damage, according to the fighter.

Here’s the good news: Mike Perry’s arm isn’t broken. Despite Cowboy Cerrone hearing it “pop” at UFC Denver over the weekend, as he attempted to pull it off like a chicken wing in a fight-finishing arm-bar, the limb has survived. Mostly. The bad news, Perry has to undergo an MRI on Thursday to determine the extent of any ligament, tendon, and muscle damage.

Ouch. Perry and Cerrone fought in the co-main event on Saturday’s UFC Fight Night 139, which happened to mark the promotion’s 25th anniversary (which was technically Monday). Perry (12-4) dropped to 1-3 in his last four fights with the loss. He surprised many by taking Cerrone down during the first round of the bout, which opened the door for Cowboy to lock in the arm-bar.

With the win, Cerrone (34–11 (1)) set the record for most UFC wins (21), surpassing Georges St. Pierre and Michael Bisping. He also holds the record for most finishes, most fights in a 12-month period (tied with Sam Alvey). Not to mention most walks to the cage/ring in UFC/WEC/Strikeforce/Pride history.

Perry, meanwhile, posted an x-ray of his wounded limb on social media Tuesday.

“I wish there was a rule in fighting where you can’t tap, and they break your sh*t and they beat your *ss and have to knock you out,” Perry added in a self-shot Instagram video. “That would be a better fight for me.” He also posted a video showing the extremely limited range of motion he has in his left arm currently. 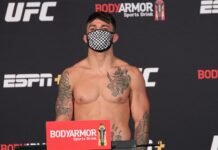