Cowboy Cerrone was in great spirits post-fight at UFC Denver on Saturday, having picked up a big win, and nearly taking Mike Perry’s arm home with him.

Denver, CO —Donald Cerrone set records on a historic night in Denver on Saturday. Most walks to the cage in the UFC/Strikeforce/Pride/WEC. Most wins in the UFC. And he set the record in style, breaking Mike Perry’s arm with a first-round arm-bar submission. In his home state of Colorado, no less. For Cowboy Cerrone, of course, he’s already looking ahead to the next one. At lightweight, he still insists.

As for where the win stands among his lengthy list of victories, “this has gotta be at the top, right? At home, setting records, holding my boy. That was cool.”

Cerrone is a new father, of course, to a four month old son, Jackson Danger Cerrone. The whole family celebrated in the cage after, including his famed grandmother. He also took a fatherly role to new fighters backstage after the bout.

“If I could say one thing to all those up-and-coming kids, [it’s that] this is so quickly gone,” Cerrone said. “Through my career, I never realized that. Now looking back, I should have enjoyed those moments more. So tonight I was, ‘yeah, this is cool man.’ Just trying to suck it all in, enjoy the whole process of this week.”

Perry announced after the fight that his arm was broken during the submission. It wasn’t exactly news to Cerrone, who admitted “I felt it pop before I went belly down. The rest was just tearing a chicken wing off. I was taking it home with me.”

So what’s next? Lightweight. Cerrone, despite the big win at UFC Denver against Perry at welterweight, intends to head back down to his old stomping grounds. He fired the first shots toward champ Khabib Nurmagomedov in the octagon after the fight, and reiterated that 155 was the plan backstage. 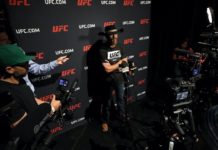