Phil De Fries successfully defended his heavyweight title, while the welterweight championship changed hands at KSW 45 over the weekend.

Poland’s KSW was back in action over the weekend with KSW 45: Return to Wembly. There, England’s own Phil De Fries defended his heavyweight title against former champ Karol Bedorf. For De Fries, it was an opportunity to cement himself as a KSW mainstay after capturing the title earlier this year.

Bedorf, meanwhile, was hoping to reclaim the title he’d lost just a couple of years ago. Yet in the end, De Fries was too much for him to overcome. The champ controlled him once he had the fight to the ground, eventually securing an Americana for the win.

In the highly anticipated rematch between Roberto Soldic and Dricus Du Plessis, meanwhile, it was Soldic getting his revenge. Du Plessis had defeated Soldic to claim the belt earlier this year. In their second meeting, Soldic made no mistake, knocking out the man who took his title in the third round.

Damian Janikowski, the highly touted Olympic bronze medalist, meanwhile, dropped to 3-1 at KSW 45, suffering the first loss of his career opposite Michal Materla.

Check out highlights from KSW 45 in the gallery below, courtesy of KSW! 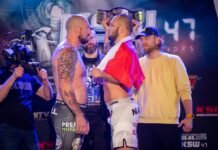 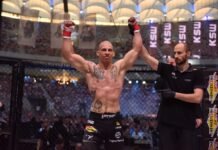