Another former UFC fighter is set to make his debut in Bellator, and he has drawn a sizeable name to welcome him.

Sicilia (15–8) broke into the UFC during The Ultimate Fighter 15 in 2012, winning his debut fight at the season’s finale. Going 5-7 in his UFC run, he last fought against Gavin Tucker in February at UFC Halifax, and wound up on the wrong end of a one-sided unanimous decision. He was released from the UFC this past Spring.

Opposite Sicilia at Bellator 189 will be ex-bantamweight champ Marcos Galvao (18–8–1), a former WEC who blossomed under the Bellator banner. Galvao captured the 135lb title from Joe Warren in 2015, but would lose it in his first title defense at Bellator 156. The loss came at the hands of Eduardo Dantas, marking the second time Galvao had lost to his fellow Brazilian. Having gone 1-1 since then, and coming off a loss to Eddie Sanchez in March, Galvao will try his had at featherweight.

Also at Bellator 189, the promotion will continue to do what the UFC seems incapable of: book featherweight fights. That night, Alexis Dufresne (6-3) will look to bounce back into the win column after a loss to Gabrielle Holloway at Bellator 174. The loss, however, followed an upset win over women’s MMA pioneer Marloes Coenen in Dufresne’s promotional debut in May last year. “Sneaky Zebra” went 0-2 at bantamweight in the UFC, but in the relatively shallow waters of featherweight, she has a chance at being a title contender with just a couple of wins, given the prestige of defeating Coenen.

Facing her at Bellator 189 will be newcomer Amber Leibrock (2-1). The twenty-nine year old California native has fought all three of her pro bouts under the Invicta FC banner. Notably, she knocked out one of Ronda Rousey’s “Four Horsewomen,” Marina Shafir, at Invicta FC 13. That July, 2015 bout marked Leibrock’s debut as a professional.

Working against Leibrock will be the fact that she has not competed in over a year.

Bellator 189 takes place at the WinStar World Casino in Thackerville, Oklahoma on December 1. Along with main event of Budd vs. Blencowe, middleweights Chris Honeycutt and Rafael Lovato Jr. face off in the co-main event. 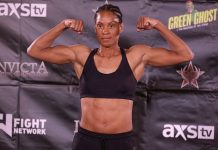 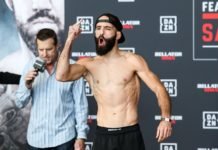 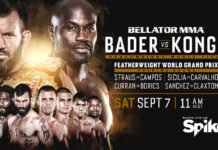