Invicta FC will host their final show of 2017 in their familiar stomping grounds at the Scottish Rite Temple in Kansas City, Mo. The promotion announced today via press release that Invicta FC 26 would take place at the venue, headlined by a previously announced flyweight title fight between champ Jennifer Maia vs. Agnieszka Niedźwiedź. Two additional bouts were also announced for the card, expected to air exclusively on UFC Fight Pass.

In the main event, flyweight champion Maia (14-4-1) will return to action for the first time since defending her title against Roxanne Modafferi in September 2016. The Brazilian is currently on a five fight winning streak dating back to June 2015, with three of those wins coming under the Invicta FC banner.

Challenger Niedźwiedź (10-0), meanwhile, is undefeated as a professional, and most recently defeated former multi-time flyweight title challenger Vanessa Porto at Invicta FC 23 this past May. The Polish fighter has two bouts in the promotion thus far, with both coming via unanimous decision.

Speaking of Porto (18–8), she has been added to the Invicta FC 26 card as well. The longtime women’s MMA veteran with over a decade of experience as a pro will take on Jessica-Rose “Jessy Jess” Clark (7-4 (1 NC)). Jessy Jess — whose twitter is very much worth a follow for her occasional abuse of puns and bad jokes — enters the bout off an August win against Carina Damm in Titan FC. 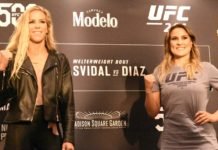