Pettis (19-6) is coming off a tough loss to Max Holloway at UFC 206 in Toronto this past December. That bout was for the interim featherweight championship, however Pettis missed weight, taking himself out of contention for the title. The fight went ahead regardless, with Holloway scoring a TKO victory in the third round. Thus ended the Roufusport fighter’s run at 145lbs.

Prior to that, Pettis had won his featherweight debut against Charles Oliveira. That, however, is his lone win since a 2014 lightweight title defense against Gilbert Melendez. In his next fight, at UFC 185, he would drop the title to Rafael dos Anjos. From there, he suffered back-to-back losses to Eddie Alvarez and Edson Barboza.

It’s been a long time since Pettis graced that Wheaties box.

Jim Miller (28–9 (1)), despite a recent setback to Dustin Poirier, has been on a much different career trajectory of late. Prior to losing a majority decision to Poirier at UFC 208, Miller had captured wins over Takanori Gomi, Joe Lauzon, and Thiago Alves. Both the Poirier and Lauzon fights saw Miller awarded Fight of the Night honors. 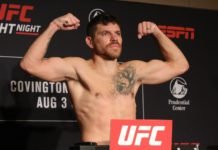 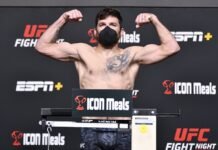