We’ve said it before and we’ll say it again: where Nate Diaz goes, chaos follows.

That proved true at UFC 281 in New York City on Saturday night. Or more accurately Sunday morning. Outside the famed Madison Square Garden, Diaz, in attendance at the event, got into a scuffle with none other than Dillon Danis, occasional Bellator fighter and teammate of Conor McGregor.

Slaps were thrown (one appeared to land on an associate of Danis), a drink was tossed, and at least part of the confrontation was caught on video. The pair were separated quickly, with a large crowd formed around them.

UFC President Dana White was informed during the UFC 281 post-fight press conference that Diaz had become involved in a confrontation. “That’s a shocker,” White retorted. “Did he really? Here?”

According to White, Diaz had called the UFC on short notice looking for tickets to the event. “The thing was that this thing’s been sold out for a while. I know Nate called last night and wanted six tickets, we didn’t have six tickets.” The Stockton native apparently sorted out the ticket situation on his own.

“I went over and talked to him tonight. It’s all good. And every time they show up, I expect something to happen,” White added.

Diaz last competed at UFC 279, where he defeated Tony Ferguson in the final fight on his UFC deal. Diaz is widely expected to try his hand at boxing next, perhaps in a lucrative fight with Jake Paul.

Danis last competed in 2019, improving to 2-0 as a mixed martial artist. Danis has mostly taken to talking trash and self-promoting on social media, and had a brief response after the incident in New York. 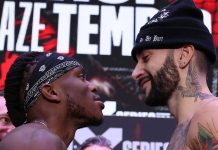