Jailton Almeida wanted to get his fight with Shamil Abdurakhimov rescheduled, and the UFC has granted him that wish.

Brazil’s Almeida (17-2) and Abdurakhimov (20-7) will collide at UFC 280 in Abu Dhabi next month. News of the booking was first reported by Ag.Fight; Almeida would subsequently confirm the match-up on social media.

“Malhadinho” wrote that he had hoped to be the first to inform fans of the match-up, but that the media had beat him to the punch.

The Brazilian heavyweight, a winner on Dana White’s Contender Series in 2021, has won his first three UFC fights. All three victories have come inside the distance; earlier this month at UFC 279, Almeida submitted Anton Turkalj in just under five minutes.

Weighing in at the low end of the weigh class, Almeida has been looked at as a potential threat in the light heavyweight division as well. But for now, he will continue to work his way up the heavyweight rankings.

Abdurakhimov was the man who was supposed to face Almeida at UFC 279. He’s lost three straight, and has not won a fight since a 2019 finish of Marcin Tybura, via TKO.

UFC 280 takes place on October 22, 2022 at the Etihad Arena in Abu Dhabi, UAE. Headlined by a pair of hotly anticipated title fights, the following bouts have been reported for the event so far: 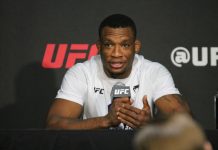