Germaine De Randamie hasn’t been seen in the octagon for some time — and you can expect her to be out just a little longer.

Nine months or so, perhaps. On Tuesday, De Randamie, a former UFC women’s featherweight champion, announced on social media that she was pregnant.

“Woohooo we can finally scream it from the top of our lungs, ‘WE ARE PREGNANT,'” De Randamie wrote in a brief statement alongside a photo of her and her partner, Samantha. “We are blessed with our little miracle, expected March 2023.”

Known as “The Iron Lady,” the 38-year old De Randamie (10-4) has not been in action since an October 2020 win over Julianna Pena. The UFC’s inaugural 145lb champion among women, De Randmie’s absence of late did not go unnoticed by fans and media outlets, with UFC President Dana White deferring to the fighter after she was removed from the bantamweight rankings last year due to inactivity.

De Randamie is 6-1 across her last seven fights, and was circling another title shot before dropping out of sight. There’s a good chance that she could still mount a run at the title, after time away to start her family. 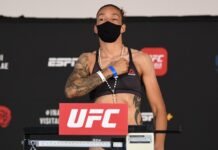