Las Vegas, NV — The UFC’s commentary team suggested on Saturday that Jailton Almeida’s submission of Anton Turkalj at UFC 279 was “too easy.”

The Brazilian, who improved to 3-0 in the UFC at the event, begs to differ. While he admits the first-round rear-naked choke may have looked easy to the untrained eye, what was on display was the result of hours and hours of training.

“We train so hard in the gym exactly for that. It’s a process. We work so hard over there,” Almeida (17-2) told media outlets including Cageside Press following the fight. “I understand that people may look at it and say ‘yeah that looked easy,’ but no, it’s a process. We go all the way back there and we put so much of an effort during training so we can come over here and make it look easy in your eyes. But it is a very hard process and we go all-out at the gym.”

Following the win, there was some sentiment among fans that Almeida should stick around Las Vegas and enter into this year’s ADCC grappling tournament. The event runs from September 17 to 18 in Vegas.

“Man, it’s going to depend a lot on my coaches over there,” Almeida replied when the idea was floated. “If they really want to stay, if they kind of say ‘yeah,’ everybody’s going to stay.”

Earlier this year, Almeida had called out former UFC heavyweight champ Andrei Arlovski. But there’s another fight he’s gunning for now, one that was originally supposed to happen Saturday.

“I want to fight Shamil [Abdurakhimov]. Hes a ranked guy, so that’s the focus right now,” Almeida stated. “The focus is to actually go to Abu Dhabi, or, if we can’t make it to Abu Dhabi, let’s go to Brazil. Why not?” 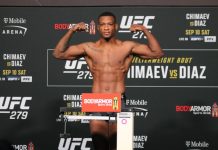