Los Angeles, CA — A.J. McKee is set to make his lightweight debut against Spike Carlyle next month, with the fight serving as the co-main event of Bellator 286.

Ahead of that October 1 scrap, McKee (18-1) told Cageside Press in an exclusive interview that the move up in weight has been going well.

“Great. Life is amazing, you know? I got into practice with a smile on my face every day,” McKee said. “Faster, stronger, bigger, better. That was the whole mind set, revamping after the L. Just coming back, new and improved.”

The L in question was a decision loss to Patricio Pitbull, the first defeat of McKee’s previously unblemished career. The loss cost him his featherweight title, and many expected a rubber match in his career series with the Brazilian, which is tied 1-1.

Instead, despite questioning what fight the judges were watching earlier this year, he’s making the long-anticipated move to 155lbs.

The fight with Carlyle is unlikely to be boring. The UFC veteran has won five straight fights since exiting that promotion, and his Bellator debut was in the running for Comeback of the Year in 2021.

McKee, however, has goals past picking up the win in his debut in a new weight class. While Usman Nurmagomedov, cousin of former UFC star Khabib, is approaching his own title shot, A.J. McKee has his sights set on gold.

“Like I said, champ champ, from day one,” he exclaimed. “Champ champ. It don’t matter who it is, who’s in front of me. That’s Khabib’s cousin, but it ain’t Khabib. 55s, man. Faster, stronger, bigger, better. If I can’t be undefeated no one can. That’s the way I feel about it.”

Watch our full interview with A.J. McKee above. The event takes place October 1, 2022 at the Long Beach Arena in Long Beach, CA.

UFC Vegas 61, Bellator 286, ONE on Prime Video 2: Who Won A Weekend That Saw UFC At a Rare Disadvantage 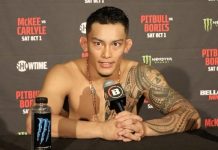