Till (18-4-1), a Liverpool, England native who missed out on both UFC London cards this year, is set to take on Driscus Du Plessis (17-2) at UFC 282 this December. News of the booking was first reported by ESPN, who have noted that verbal agreements are in place for the match-up.

A former welterweight title challenger, Till moved to 185lbs in 2019, but after an initial win over Kelvin Gastelum, he’s dropped back-to-back fights against Robert Whittaker and Derek Brunson.

Till has not competed since the Brunson bout, which saw him lose via submission in the main event of UFC Vegas 36 in September 2021.

A fight against Jack Hermansson had been scheduled for London in July, but Till was forced to withdraw due to injury.

South Africa’s Dricus Du Plessis, a former KSW champion, has won all three of his UFC bouts to date. The 28-year old most recently captured a unanimous decision win over Brad Tavares at UFC 276 in July. Dating back to his time outside the organization, Du Plessis is on a five-fight win streak overall.

UFC 282 is expected to take place at the T-Mobile Arena in Las Vegas, Nevada on December 10, 2022. The following fights have been reported for the event: 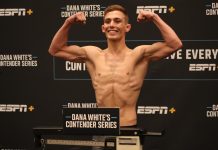