Both of the two top fights at Friday’s LFA 134 — the penultimate bout of the evening featuring featherweights Milko Tucto and Olivier Murad, and the headlining affair between Muin Gafurov and Herbeth Sousa — had seen fighters come in heavy.

In the main event, it was Gafurov missing weight, albeit just 0.2 pounds over the bantamweight limit. A similar small margin was in play in the co-main event, where Tucto had missed the featherweight limit by 0.4 pounds.

At least no titles were on the line in either fight. Instead, Tajikistan’s Gafurov was looking to bounce back from a loss to Chad Anheliger on Dana White’s Contender Series last year. Sousa, a Future FC and Cage Fury champ, was making his Legacy Fighting Alliance debut.

LFA 134 goes down live on Friday, June 10, 2022 at the Bell County Expo Center in Belton, Texas. The main card streams live on UFC Fight Pass starting at 9PM ET. Full results from the event can be found below. 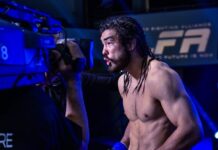