It turned out to be a rude welcome.

A former UFC standout and TUF Brazil winner, “Shoeface” had won three of his four fights under the PFL banner in 2021, with the lone exception being a No Contest due to a ground strike. Still, he went all the way, finishing when it mattered, and claiming the million dollars at the end of the tournament.

Junior found the finish again on Wednesday night, early. Monte went right after Junior off the opening, showing little respect for the defending champ. But a right hand by Antonio Carlos Junior rocked him! Junior went right into takedown mode, and rather than try to unload ground n’ pound, he went hunting the neck — and found it. He soon had a d’arce choke wrapped up, and Monte was left with no choice but to tap.

Less than thirty seconds is all it took for Junior to secure the submission win, and claim a key six points towards the playoffs. 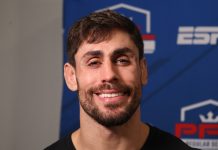 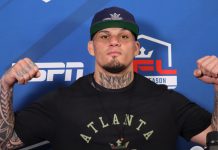 PFL 4: Delan Monte Wants to Take Million Dollars Back to Brazil, “Change the Live of Many People”