In the main event, Chihiro Suzuki was looking for his second straight win under the promotional banner when he took on Ren Hiramoto. Primarily a kickboxer, Hiramoto was competing for just the second time in mixed martial arts.

“This will be my first time headlining an MMA event but I don’t really feel any pressure about it. I’m going to take this fight just like any other fight and do my best to win,” Suzuki was quoted as saying in a press release ahead of the fight.

RIZIN Landmark Vol. 2 takes place Sunday, March 6, 2022 at a secret, undisclosed venue in Japan. An English language broadcast is available via LIVE-NOW, with Joe Ferrarro and Damien Brown on commentary. Full results can be found below. 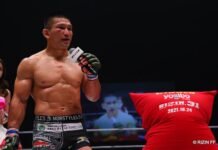