Former Invicta FC champion and UFC title challenger Megan Anderson has been noticeably absent from the cage over the past year — and that isn’t likely to change any time soon.

The Australian, who fought out her contract at UFC 259 last March in a losing effort against Amanda Nunes, for the women’s featherweight title, has released a statement on social media pertaining to her fighting future. And at least for the time being, it doesn’t appear she has one.

“For all those that are asking and continue to ask me daily, I have no plans to fight right now. I’m not saying that I will never fight again, but at this point in my life, I’m loving everything else I’m doing,” the 31-year old wrote. “From gaming and streaming, working as an analyst for ESPN and Invicta, and currently filming my first major feature film, I couldn’t be happier and fighting isn’t on my mind.”

“I’m currently not affiliated with any gym, I’m not signed to any promotion right now and haven’t been pursuing a new fight contract. I appreciate the love and interest form everyone hoping to see me in the cage again, but hopefully this answers your questions for now.”

Anderson has hit increased levels of popularity on Twitch, the video game streaming platform. Still, she appeared to be a high-profile free agent after exiting the UFC, one that would easily attract the attention of the PFL, and especially Bellator MMA, who actually have a women’s featherweight division.

Late last year, Anderson revealed that she had a part in Extraction 2, an upcoming action flick starring Thor himself, Chris Hemsworth. During her UFC run, Anderson (11-5) posted a 3-3 record, earning wins over Cat Zingano, Zarah Fairn, and Norma Dumont. During that time, she trained under James Krause at Glory MMA and Fitness in Kansas City. 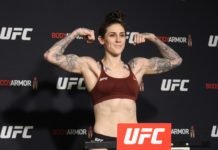