The heavyweight match-ups have been announced for the PFL Challenger Series 6, and a former UFC middleweight will be moving up two divisions.

The heavyweight fighters that will be taking part are the following.

Former Dana White’s Contender Series veteran and UFC middleweight Bevon Lewis (7-3) will be jumping up to heavyweight when he enters the PFL smart cage. Lewis has faced the likes of Uriah Hall, Darren Stewart, and Trevin Giles.

BJJ champion Marcelo Nunes (7-1) comes from CFFC, where he went 2-0 with two stoppage wins. He holds a 100% finish rate, with five of them coming by way of submission.

One of the better heavyweights not signed to a major organization will finally get his chance as Brett “Big Dog” Martin (10-1) steps in the PFL smart cage. Martin is a former Lights Out heavyweight champion and LFA alumni. He holds a win over Renan Ferreira, who competed in the 2021 PFL season.

Chad Johnson (6-3) is a Dana White’s Contender Series and LFA veteran. He holds a 100% finish streak, with five of his wins coming in the first round in under three minutes.

A pair of football players round out the last two heavyweights in week six. Former Atlanta Falcons defensive lineman Jon Cunningham (1-0) made his professional debut in December at Fury FC 55. He knocked out Jacob Bradley Williams in the first round. Cunningham trains out of Jackson-Wink.

The match-ups are as follows: 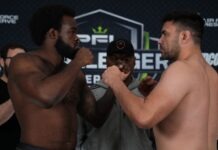