Megan Anderson has not competed in mixed martial arts since her featherweight title fight against Amanda Nunes at UFC 259 last year.

Now, the former Invicta FC champ has opened up about what she feels was a lack of training and guidance ahead of the bout, while she was a member of Glory MMA and Fitness.

Responding to a fan on social media who accused her of throwing the gym under the bus in her loss, while another Glory MMA Fighter, Brandon Moreno, was thriving, Anderson wrote that “When you only received 1 x 30 pad session a week for the entire 7 months I was [in] camp and received no other coaching, no one picking my training partners/rounds or even coaching me through those rounds the entire time, when no matter how many times I asked to sit down and talk about a game plan an excuse was always given for it to never happen then it’s not throwing them under the bus… it’s saying exactly what happened.”

In regards to the Moreno comparison, Anderson added that “Now Brandon had a personalized session every single day, whenever he traveled for the UFC Spanish broadcast the coached traveled with him to make sure he had personalized training at all times.”

“If you’re telling me that just 1 x 30 mins pad session a week for a world title fight against the greatest female fighter of all time is enough coaching than you’re delusional,” Anderson finished.

The towering Anderson did not last long against Nunes in their March 2021 match-up, ending up submitted via a reverse triangle arm-bar just over two minutes into the opening round. It was another notch on Nunes’ belt, while Anderson was heavily criticized for her performance.

It did not take long for Glory MMA and Fitness member and fellow UFC fighter Jeff Molina to respond. The flyweight was quick to defend the gym and head coach James Krause, who came under fire this past weekend when Darrick Minner fought injured at UFC Vegas 64.

“This couldn’t be further from the truth. Way to wait until MMA Twitter is trashing JK [James Krause] for his fighter fighting injured just like 90% of fighters do just cause [you] want some Twitter clout,” Molina wrote in response. “I was there your entire training camp for Nunes. You sat out 99% of the live [rounds], you would ask your training partners ‘jokingly’ to let you win the [round], you were the laziest training partner always talking about how tired you were 5 min into drilling, you would intentionally hurt training partners who were new and had an obvious skill gap (you broke a soccer mom’s nose in probably one of the few [rounds] of sparring you did outside of practice), you have an alcohol problem and were sloshed a month and a half before your title fight, you burned bridges with every single person in the gym including the front desk guy because of how much of a head case you are.”

“Don’t forget how Krause talked you off the ledge before every single fight and how complimentary you were of him changing your career and life. You lose one fight and now everything changes? Take some accountability for yourself. You lost that fight the second you signed the dotted line— look in the mirror that’s why you lost that fight.”

Krause’s camp has gone through a particularly rough week, with betting irregularities surrounding the Minner fight currently under investigation. Megan Anderson, meanwhile, has not responded to Molina’s allegations regarding her behavior in the gym. 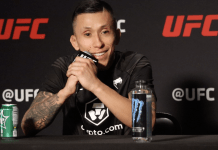 UFC Vegas 56: Jeff Molina Frustrated With Performance But Says “I Won That Fight”