Neil Magny will be facing some “Pain” at UFC Columbus this March.

Multiple sources, speaking on condition of anonymity, have confirmed to Cageside Press that the UFC is targeting a welterweight bout between Magny and Max Griffin for the Fight Night event on March 26, 2022. Verbal agreements are in place from both parties, with bout agreements expected to be signed shortly.

News of the booking was first reported by MagicM of the Magic and Andrew MMA Betting Show.

After a roller coaster ride to start his octagon career, Max “Pain” Griffin (18-8) has settled in and put together a solid three-fight winning streak dating back to November of 2020. In that span, he has picked up victories over Ramiz Brahimaj, Song Kenan, and Carlos Condit.

His knockout of Kenan earned Griffin a Performance of the Night bonus.

Magny (25-8) fought just twice in 2021, a dreadfully slow year by his standards. The 34-year old split a pair of fights, dropping a bout to Michael Chiesa, then bouncing back against Geoff Neal.

Currently ranked #8 in the welterweight division, Magny will be facing an unranked opponent hungry for a number next to his name when the pair collide at the Nationwide Arena in Columbus.

Currently, the UFC Columbus card has the following reported bouts linked to it: 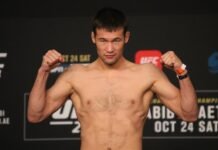