The Legacy Fighting Alliance flyweight title will be on the line when Carlos Mota steps into the cage for the first time in 2022 at LFA 122.

Mota had a heck of a time getting a fight in last year. In fact, 2021 saw him fight just once, after multiple bookings first in February, then July, fell through. Finally, the undefeated Brazilian got back to work in July, winning a unanimous decision against Jefferson Oliveira — marking the first time Mota had competed since 2019.

At LFA 122 on Friday, Mota was up against American Charles Johnson for the LFA flyweight championship. Johnson, who had been an interim champ, became the undisputed flyweight king in LFA after defeating Joao Camilo last August.

The LFA 122 card is set to take place at the The Factory at the District in St. Louis, Missouri on Friday, January 21, 2022. The event streams live exclusively on UFC Fight Pass. 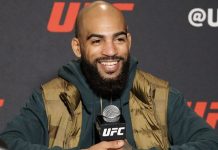 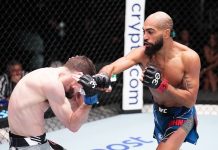