Welterweight staple Mickey Gall is set to welcome Canada’s Mike Malott to the octagon this April.

Gall (7-4) and Malott (7-1-1) have been lined up for a fight at UFC 273 on April 9. While a location for the event has not been officially announced, Gall posted on social media that he was “fighting in April in Brooklyn.”

MMA Junkie was first to report the news on Sunday.

Gall went 1-1 in 2021, picking up a win over Jordan Williams via submission in July, then dropping a unanimous decision to Alex Morono in December. Overall, Gall has traded wins and losses since 2016, and he’ll continue that streak in April should he get the upper hand over Malott.

Malott, from Hamilton, Ontario, earned a shot in the UFC on last year’s edition of Dana White’s Contender Series. The 30-year old, who has won his last three fights, submitted Shimon Smotritsky with a guillotine inside of a minute to earn his spot on the UFC roster.

With the addition of Gall vs. Malott, three bouts have been reported for the UFC 273 card thus far. If the promotion does opt to host the event in Brooklyn, the Barclays Center is the likely destination. 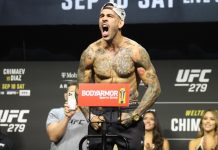