The trilogy fight between Max Holloway and Alexander Volkanovski was official for all of about 24 hours this week, before it fell through.

The hotly anticipated UFC 272 main event was one of four rematches the UFC had planned for the first quarter of 2022. But with Holloway pulling out of the fight due to injury, Volkanovski now needs a new dance partner.

Not surprisingly, a number of names have stepped up, from former champions and challengers to future title hopefuls. Who will get the call? Most likely who ever can be ready by March — but there are more options than you might think to fill in against the Australian.

It might feel unlikely, but Giga Chikadze could propel himself to a title fight with a big performance a week from now.

Chikadze has been a breath of fresh air in the UFC’s featherweight division. Since losing on Dana White’s Contender Series in 2018, the Georgian kickboxer, who previously competed for GLORY, has done nothing but win. He arrived in the UFC proper in 2019, piling up a number of decision wins before really finding his stride in 2020. Since then, he’s put together three straight finishes which have earned him three consecutive Performance of the Night awards.

The fact that those wins have come against notable names like Cub Swanson and Edson Barboza has fans pumped to see how far Chikadze can take things. In the main event of UFC Vegas 46 next week, he’ll face Calvin Kattar — and a strong performance could put him at the front of the pack.

Of course, he’ll have to escape the fight relatively unscathed to make the short turnaround that UFC 272, which takes place on March 5, would require. 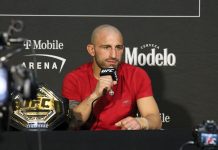