With Viviane Arauju forced off the card due to injury, women’s flyweight Alexa Grasso has been removed from UFC 270.

News of Araujo pulling out of the fight, due to an undisclosed injury, was first reported by ESPN Deportes earlier this week. MMA Junkie was first to report that Grasso would no longer remain on the card.

Whether the promotion looks to keep the match-up together remains to be seen, and will likely be dependent on the severity of Araujo’s injury.

Alexa Grasso (13-3) is sitting on a two-fight win streak at the moment, having picked up victories over Ji Yeon Kim and Maycee Barber. The Mexican fighter’s biggest obstacle of late has been simply fighting consistently, with just a single appearance in each of the last two years.

Araujo (10-3), meanwhile, was looking to bounce back from a loss to Katlyn Chookagian at UFC 262 last May.

UFC 270 takes place January 22, 2022 at the Honda Center in Anaheim, California. The following bouts have been reported for the card thus far: 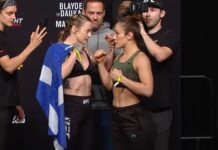