A fight between two of the UFC’s top light heavyweights is being targeted for the March 12 main event as a bout between Thiago Santos and Magomed Ankalaev is being finalized.

Two of the top-ranked contenders in the UFC light heavyweight division are expected to meet this spring as a fight between former title challenger Thiago Santos and the surging Magomed Ankalaev is being targeted for March 12.  ESPN was first to report the news.  The two are expected to be the main event.

Alright … Magomed Ankalaev (@AnkalaevM) has looked like the real deal as of late. We’ll know for sure after this one. Ankalaev vs. Thiago Santos (@TMarretaMMA) is in the works to headline a UFC Fight Night on March 12, per sources. pic.twitter.com/iFz7ZNYEGO

Thiago Santos (22-9) recently snapped a three fight win-streak with a victory against the equally electrifying Johnny Walker in October.  After suffering serious knee injuries in his title fight with Jon Jones, Santos returned in 2020 and dropped fights to current champion Glover Teixeira and Aleksandar Rakic.  Prior to the fight with Jones in 2019, Santos had cut a path to a title shot with finishes of Jimi Manuwa, Eryk Anders, and former champion Jan Blachowicz.

Magomed Ankalaev (16-1) goes into the fight on a seven fight win-streak that has seen him break into the upper echelon of the light heavyweight rankings. After losing his UFC debut against Paul Craig, Ankalaev has gone on to dispatch Ion Cutelaba (twice), Nikita Krylov, former title challenger Volkan Oezdemir, and others.  The victory over Oezdemir was his most recent bout, taking place in October.

No location for the event has been announced, although it is expected to take place at the UFC Apex in Las Vegas where the majority of fight nights have been held since 2020. 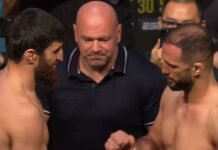