Gonzales (12-0) returns for his second fight under the Bellator banner at Bellator 271. In his Bellator debut, he defeated then ranked Tywan Claxton at Bellator 260 via split decision, taking his ranking in the process.

While Gonzales appreciates being a ranked Bellator fighter, the goal has not been achieved.

“Man, it’s great. It feels awesome, but you know, there is still work to be done. I still have bigger goals and higher dreams that I want to achieve. I’ve been working at this game for a long time, so finally getting some recognition, some respect on my name feels good. It’s a big milestone and accomplishment, but like I said, there are bigger things I’m working towards. So, eyes on the prize,” Gonzales told Cageside Press in an exclusive interview.

There is no slowing down for the “J-Train” as he faces No. 5 ranked featherweight Pico (8-3) this Friday. Pico was once regarded as the best prospect in all of MMA, and while he has fallen from that pedestal a little bit, he is still very high in everyone’s eyes and has a lot of hype.

Gonzales was very excited when he got the call, and he plans on taking Pico’s hype.

[This fight] got my heart going. It got me kind of like, ‘Alright, cool, this is what I’m talking about. I knew it was going to happen; it was only a matter of time. He’s No. 5, and I’m No. 8, lets keep climbing that ladder,” Gonzales said.  “He deserves the hype, respectfully. I respect him as an opponent, he is tough and puts it on the line-he either puts people out, or he gets put out, but either way, he leaves it all out there. In my eyes, I’m the next big thing, so this is my show now, and these are the kind of guys I have to beat to show that.”

Gonzales says he believes he can catch Pico in the first or second round and put him to sleep.

Watch the full interview of Justin Gonzales above. He faces Aaron Pico at Bellator 271 this Friday, November 12, at the Seminole Hard Rock Hotel & Casino in Hollywood, Florida. 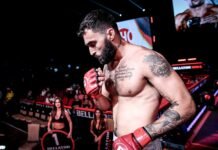 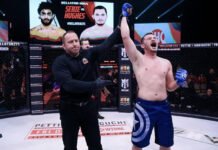