A botched weight cut has caused a switch-up in the Brave CF 55 main event.

Per a press release from Brave CF, Ali Bagautinov has drawn a tough new opponent for BRAVE Combat Federation’s return to Russia this Saturday, November 6. The Russian hometown hero will face American standout Sean “Shorty Rock” Santella in the last semifinal clash of the prestigious BRAVE CF Flyweight World Title Tournament, which serves as the headliner of BRAVE CF 55 in Rostov-on-Don.”

Santella (23-7-2) replaces Jose “Shorty” Torres, who withdrew from the fight due to difficulties making weight prior to official weigh-ins. Santella was last in action against Torres at Brave 42 in the quarterfinals of the eight-man flyweight tournament; the pair fought to a draw. They were expected to rematch six months later, but the bout was scrapped due to Santella pulling out with an injury. Before his draw with Torres, Santella won three straight in CFFC.

Bagautiov (20-7) is riding a two-fight win streak since joining the promotion defeating Oleg Lichkovakha and, most recently Dustin Ortiz.

The winner of the semifinal showdown between Santella and Bagautiov will fight for the championship against the highly-touted Velimurad Alkhasov.

The BRAVE CF 55 Fight Card moves forward with nine fights and now looks like this:

The event is available at BraveCFTV.com and Fight Network and starts at 9:00 am EST / 6:00 am PT 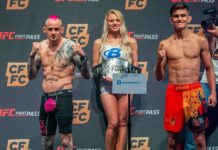 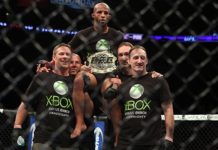 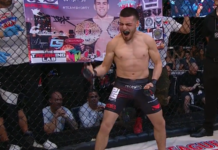