A battle between two older flyweights with a ton of experience. They have a combined record of 54-13. I like both fighters and I wish these two were fighting the other flyweights later on the card.

Both are mainly grapplers and on the feet, it’s nearly even. Puerta is the longer fighter but Shang makes up with it for his pressure.  I would favor Shang because of his aggression and Puerta is hittable going backwards. A fight I’m sure will go to the mat so that’s going to be where the fight is decided.

Overall, I’ve been more impressed with Shang. He just has problems putting himself in bad positions and he doesn’t want to do that against Puerta. Shang is on a 20-fight win streak and I’m taking him for the upset. I think he’s slightly better everywhere and has a big endurance advantage. Not confident at all since Chinese fighters have been doing poorly in the UFC and on DWCS, but this one has a real shot. I see Shang at a +160 dog and that’s worth betting. If Puerta wins it will be by submission and that’s +350 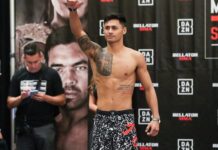