As she so often does, Thailand’s Stamp Fairtex danced her way to the cage at ONE: NextGen.

There would be plenty of reasons to dance following the conclusion of her fight in Singapore on Friday.

Fairtex was paired up with Julie Mezabarba in a semifinal of the ongoing ONE women’s atomweight grand prix. Brazil’s Mezabarba was not Stamp’s original opponent, but the tournament has undergone more than one shakeup. In this case, former UFC fighter and ROAD FC/RIZIN FF champ Seo Hee Ham had advanced from the quarterfinal round, but was forced to withdraw from the fight.

Replacement fighter Mezabarba got the nod to replace Ham after defeating Mei Yamaguchi in their alternate bout earlier in the year.

Mezabarba appeared to bite on several of Stamp’s feints in the opening round Friday, giving the Thai fighter an edge early. That led to a change of game plan in the second, with Mezabarba immediately pursuing a takedown. The ground was expected to be one area where Mezabarba had the edge, but Stamp reversed position and got to mount, allowing her to fire off ground n’ pound.

Mezabarba had no choice but to give up her back, and Stamp was able to get her hooks in. Late in the round, she got the rear-naked choke in place, but only briefly.

The near-finish at the end of the second was the closest the fight came to being stopped early. In the third, Mezabarba appeared to chase the finish at times, but Stamp’s striking was too much. The Muay Thai expert, a former two-sport champ, went on to earn a unanimous decision victory — and clinch her spot in the atomweight grand prix final.

That fight, expected to take place on December 3, will come against Ritu Phogat, who also won her semifinal fight at ONE: NextGen on Friday. 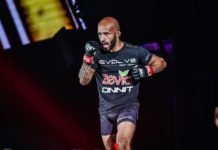