Phoenix, AZ — There was a small army of undefeated prospects on the Bellator 268 card who found success on Saturday. Sumiko Inaba, Lance Gibson Jr., and of course Jaylon Bates, who secured an arm-bar submission in the opening round against Raphael Montini.

The bantamweight standout wanted a short night, and that’s exactly what he got.

“It was quick. I wanted a quick, easy night. I said, whether we’re working for five minutes or we’re working for 15, we’re going to be working,” Bates told media outlets including Cageside Press after the fight. “So I’m glad that happened.”

His turnaround moving forward will depend on a trip to see the doctor. “I’ve got medicals on Monday, to get some things checked out. As long as they come back in pretty pristine condition, I’m down to fight,” said Bates. “I just wanted to fight, keep going, keep the ball rolling, get 5-0, get 6-0, keep going.”

Keeping things rolling may or may not include Keith Lee, who Bates has called out. Asked if he had a message for Lee, Bates replied saying “not really a message for him, it’s just, he’s watching me. Losers watch winners. So he watched me, and eventually if he wants to cross my path and be another name on my checklist, he will be. But other than that, I’m coming for the belt, I don’t really care about anybody else besides the person who holds the belt. This is just the beginning.”

Watch the full Bellator 268 post-fight press conference appearance by Jaylon Bates above. More coverage from the event can be found below. 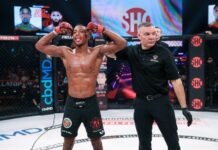 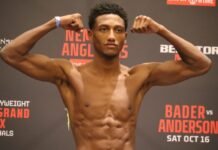 Bellator 274: Jaylon Bates Willing to Keep Pay the Same If He Can Fight More Often