It was another successful night at the office for Jaylon Bates at Bellator 283, but it came awfully close to falling apart.

Bates (6-0) admits that opponent Mark Coates got in his head during the fight, which ended in a split decision in his own favor.

“I was worried, I was worried a little bit,” Bates admitted, asked about the feeling as the scores were being read. “I wasn’t worried that I wasn’t going to win, I was just disappointed in my performance. I can perform at a really high level, I know how high I can perform. And just tonight, I felt tired. I felt almost like I didn’t want to be in there. When they were reading off the cards, I didn’t know which way it was going to go. I thought I’d won, and I’m glad they saw it that way, but at the end of the day, I didn’t know.”

Much of what went wrong in the fight is the result of what occurred ahead of the fight. Or more accurately, what didn’t occur, which was training enough, the Team Bodyshop fighter admitted.

“I didn’t do nothing. This camp, I only trained for two weeks. Didn’t take it serious. I almost missed weight, horrible weight cut, not eating right,” Bates revealed. “I didn’t take this camp serious, and God was in my favor. I’ve got to stop relying on him and put in the work, because I’m super-talented, but sometimes I rely too much on my talent.”

Ironically, it was Coates who would end up missing weight for the bout. Asked why he didn’t take the camp seriously, meanwhile, Bates replied “Women, honestly. I’ve got to stay away from women and do my job. They’ll drain the life out of you if you let them.”

Watch the full Bellator 283 post-fight press appearance with Jaylon Bates above. More coverage from the event can be found below.

Bellator 283: Archie Coglan Doesn’t Have a Hit List — Yet 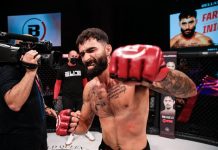 Roman Faraldo Not Happy with Bellator 283 Performance, Regrets Calling Finish Despite Hitting It