One of the more curious match-ups at UFC 266 came as part of the event’s early preliminary card.

Martin Sano was making his debut on the night, going up against Matthew Semelsberger. While “Semi the Jedi” had stumbled a couple of times early in his UFC run, he was still a heavy favorite against a fighter who hadn’t won a bout since 2014.

That’s right: through his last three fights, Sano was 0-2-1, and coming off a draw under the Bellator banner. Sano, however, was part of Nick Diaz’s camp, and that appeared enough to bring him in.

That turned out to be a mistake on the part of the promotion. A heavy underdog that had many questioning his spot on the promotion, Sano was in and out of the octagon Saturday in less time than his walkout took.

Semelsberger took the center of cage right away. He pumped out a few left jabs and threw another jab to the body. Followed by that jab, Semelsberger threw a perfectly placed right hand— clean on the jaw for the knockout. Sano’s debut at UFC 266 only lasted a few seconds.

One punch is all @SemiTheJedi needed 👊

There will be lots of talk about the signing, but that shouldn’t take away from Semelsberger, who did exactly what was expected of him Saturday. 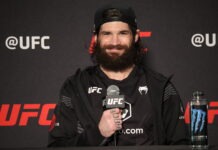 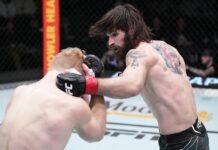