Week two of Dana White’s Contender Series Season 5 sees the show back to its usual five fights. Not that the season opener of DWCS being a fight short seemed to matter, when it came time to hand out the UFC contracts.

In a historic first, last week’s Contender Series outing saw a losing fighter (Carlos Candelario) granted a contract. While UFC President Dana White had hinted in the past that such a thing could happen, it still came as something of a surprise. In total, five contracts were handed out on an episode that only had four fights to begin with.

Would there be any similar surprises this week? Among the notables were Bellator MMA veteran Chidi Njokuani, a dangerous striker in a middleweight showdown with Mario Sousa, and ONE Championship veteran Muin Gafurov. For those keeping track, Gafurov’s only loss since 2016 had come against UFC ex-pat John Lineker.

Dana White’s Contender Series 2021 Week 2 kicks off at 8PM ET on ESPN+ in the U.S., and UFC Fight Pass internationally. Full results from DWCS Season 5 Week 2 can be found below.

Kicking off Saturday’s card, Gafurov went the distance with Chad Anheliger. Muin’s wrestling was on point, but he would eat a nasty knee and found himself in danger. Come the third it was still anyone’s fight, and they’d swing right to the bell. In the end, Canada’s Anheliger would pick up the split decision win, as the biggest underdog on the card no less.

CJ Vergara wasted no time whatsoever sealing the deal for a UFC contract in the second fight of the night. A right hand rocked Bruno Korea, knees in the clinch softened him up, and a final knee to the body sent him down. Less than a minute, and the UFC’s flyweight division has its latest addition.

The second bantamweight fight of the evening also went the distance — and also ended in a split decision. That saw Saimon Oliveira get his hand raised.

Chidi Njokuani had the edge on the feet and on the ground in his fight with Mario Sousa. The first round seemed to drag on forever due to multiple low blows by Sousa. It was probably even longer for Chidi. In the end, he put it away in the third round.

Josh Quinlan, in the final fight of the evening, seemed to find a home for every strike he threw. Short-notice opponent Logan Urban lasted less than a minute. 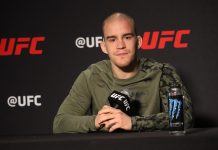 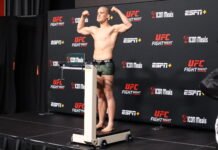