Fabio Cherant may have missed weight for his short-notice UFC debut, but he was one of the first fighters to the scale at UFC Vegas 34’s weigh-in on Friday — and made the light heavyweight limit without issue.

Fighting out of Hartford, CT, Knight was another New Englander, and proved to be a nightmare for Cherant in the Battle of New England.

The Knightmare is ALIVE AND WELL 🤯🤯🤯 @Knightmare205 #UFCVegas34 pic.twitter.com/NJExLh6sB7

Knight is back in the win column with the victory, improving his UFC record to 2-1. Cherant is now on a two-fight skid, having been finished in both of his fights. That puts him in must-win territory moving forward, but his debut coming on short notice should get him another look. 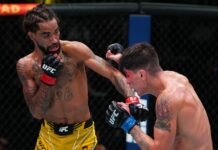