Lightweight Roosevelt Roberts was looking for his first win in over a year when he stepped into the octagon at UFC Vegas 34 opposite Ignacio Bahamondes.

Were it not for a loss to Kevin Croom being overturned due to a drug test failure for marijuana, Roberts would be 0-2 in his last two outings. Still, a win was of the utmost importance for “The Predator,” whose opponent Bahamondes was a fellow Contender Series alum looking for his first UFC win.

The Chilean prospect had been given a tough out in his debut, stepping up against John Makdessi. He looked good in that fight; Saturday, he looked great.

Both fighters took the center of the octagon after a touch of gloves. After a couple of punches, both exchanged leg kicks. Roberts shot in and put Bahamondes against the fence. Bahamondes escaped. The Chilean landed a nice right hand and ate a jab in return. Bahamondes landed a leg kick that dropped Roberts. Roberts landed a 1-2 that backed Bahamondes up. Bahamondes missed a hook and ate another jab. Bahamondes attempted a spinning back fist but missed.

The referee halted the action from an eye poke, but it was actually a punch.

With just over two minutes left in the round, both fighters exchanged combinations. Roberts shot in for a takedown and put his opponent against the fence for 25 seconds or so. Bahamondes got off the fence and started walking down Roberts. Bahamondes landed a nasty combo-hook, straight right, body kick. With 30 seconds left, Roberts clinched with Bahamondes again.

The second round started with a Bahamondes leg kick. Bahamondes landed a combo that hurt Roberts. One minute into the round and Bahamondes teed off on Bahamondes. Both fighters exchanged leg kicks. Roberts’ jab was landing. A spinning body kick from Bahamondes landed; Bahmondes would execute several flashy spinning attacks throughout the fight.

Bahamondes landed several leg kicks throughout the three minutes remaining in the frame. Roberts shot for a takedown with about 90 seconds left and put Bahamondes against the fence. Bahamondes escaped; the round ended with Roberts eating a punch.

What a fight — and what a finish! As first UFC wins go, it’s one of the best in recent memory. 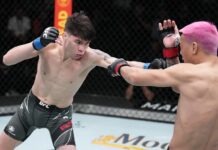 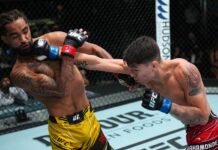