MMA is one of, if not the, most exciting sports on the planet. It’s also one of the most dangerous. If you’re reading this, you’re about to find out why. Assuming you didn’t already know.

In any sort of subjective list like this, there are going to be omissions, so feel free to chime in with some of your top picks for unfortunate mishaps in the cage.

This is also not an attempt to glorify injury — the road back from these sort of mishaps is long and arduous to say the least. But it’s all part of the sport in the end, so with no further ado, here’s the ten most gruesome injuries in MMA history.

Remember that time a small alien being attempted to hatch itself out of Mark Hominick’s head?

Canada’s Hominick had been a contender in the featherweight division since the WEC days. When World Xtreme Cagefighting was absorbed into the UFC, a single win was all it took for Hominick to earn a title shot against Jose Aldo. That win came via TKO over George Roop, and left Hominick sitting on a five-fight win streak that included names like Leonard Garcia and Bryan Caraway.

The showdown with Aldo came in Toronto at UFC 129 in April 2011, at the Rogers Centre, better known as the SkyDome. For five rounds, Hominick went toe-to-toe with one of the all-time greats; not only that, he came close to stealing the victory in the final frame.

Outside of that late surge, however, the lasting image of the fight was of the growth on Hominick’s head.

Mark Hominick developed a hematoma during his fight with Jose Aldo at UFC 129, nine years ago today.

It remains one of the most memorable images in the sport. pic.twitter.com/ENGDGbeYr9 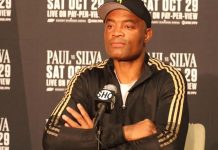