Former LFA champion and DWCS veteran Vanessa Demopoulos will be taking on Kathryn Paprocki at LFA 114 on August 27.

A strawweight bout has been added to the quickly developing LFA card on August 27 as Vanessa Demopoulos is set to take on Kathryn Paprocki.  The event is set to take place at The Factory at the District in St. Louis, Missouri.

Vanessa Demopoulos (6-3) is looking to build on her rousing victory over former King of the Cage champion Cynthia Arceo in March.  “Lil Monster” had a breakout year in 2019, winning LFA’s inaugural strawweight title and getting a short notice opportunity to compete on Dana White’s Contender Series.  The fight with Poprocki will be her first since moving to Arizona to train at Siege MMA.

Kathryn Paprocki (3-1) fights out of Denver and is looking to get her second victory in LFA.  Paprocki’s career has seen her build rapidly from the regional scene, with her second professional bout coming in Invicta and her third being her LFA debut earlier this year.

LFA 114 is set to be headlined by the featherweight championship bout featuring Bruno Souza taking on Javier Garcia.  No other bouts for the event have been announced at this time.  The even will be open to the public. 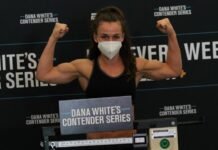