ONE Championship returned to action on Friday with their first card to air this month, Battleground II.

Topping the event, former lightweight champion Eduard Folayang was looking to get back in the win column and snap a three-fight skid. In his last outing, Folayang had fallen to fellow former champ and top contender Shinya Aoki. Prior to that loss, the Filipino fighter had lost bouts to Antonio Caruso and Peter Buist.

Overall, in his last six bouts, Folayang was 1-5 and badly in need of a win. Opposite the ex-champ on Friday was former UFC fighter Zhang Lipeng, who was looking to make a big statement in his promotional debut.

Friday’s all-MMA card featured five fights in total, with familiar names including Alex Silva and Alain Ngalani in action in addition to the main event.

A live stream of ONE Championship: Battleground II can be viewed in the embed above, where available. Full results from the event can be found below. The broadcast gets underway at 8:30AM ET. 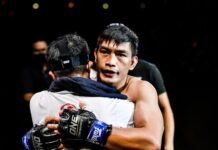