The co-main event of the evening at XFC 45, Brett Martin vs. Kyle Noblitt is about as close as you can get to a promise of fireworks as possible in the MMA world. Martin has won six in a row, and has only lost one professional fight in his career (10-1). The most impressive part of Martin’s career, however, is that this isn’t even his lone profession.

“I work Monday through Friday,” Martin told Cageside Press. “If my wife lets me work the day before the fight, I’m at work. That is why I like fighting close to home, don’t want to take vacation time, not fair to the old lady. I love fighting at home, sleeping in my own bed.”

The hardworking and happy Brett Martin plans for fireworks in the XFC co-main event this weekend.

“I’m just excited,” Martin stated. “Kinda the same story I have, fought some tough dudes. His last fight he fought on 2 or 3 days notice, I was supposed to have the Jack May fight. I don’t say no to fighting, I say no to shit that doesn’t make sense in my life. Even if the UFC is paying me what they are paying [Conor] McGregor, I won’t put the shovel down. I’m ranked 1 at heavyweight in the mid west, he’s 2, story writes itself.”

Watch our full interview with XFC 45’s Brett Martin above! 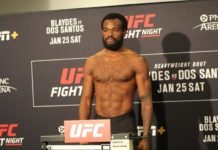