A pair of top 10 UFC heavyweights will collide in October.

MMA Fighting was first to report the news that No. 5 ranked heavyweight Alexander Volkov will fight No. 8 Marcin Tybura at UFC 267 on October 30. The fight will take place in Abu Dhabi on ‘Fight Island.’

In June, Volkov (33-9) had his two-fight winning streak snapped when he lost a unanimous decision to Ciryl Gane in his second consecutive main event. Before that fight, the Russian gave Alistair Overeem his walking papers as he battered him via TKO in February. Volkov went 1-1 in 2020, losing to Curtis Blaydes but then rebounded against Walt Harris.

After experiencing the roughest patch in his career, Tybura (22-6) is on a five-fight win streak. Potentially fighting for his job last year, the Polish fighter defeated Sergey Spivak to kick off his fantastic 2020 campaign. He would go on to defeat Maxim Grishin, Ben Rothwell and then be the first man to finish Greg Hardy. In his most recent fight, he stopped Walt Harris in the first round to win Performance of the Night.

UFC 267 is expected to be a free pay-per-view, and if UFC President Dana White gets his way, it will be the company’s third ABC card. Jan Blachowicz vs. Glover Teixeira will headline the event.

UFC 278: Marcin Tybura Believes Alexander Romanov’s Hype “Still There” After Being First to Defeat Him 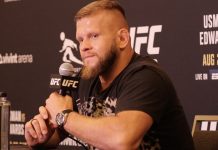