ONE Championship will return to action later this month. On Sunday, the Asian MMA promotion released the full line-up for their July 30 card, entitled Battleground.

A number of notable ONE names will be in action, including former two-division champion Aung La N Sang, as well as Victoria Lee, younger sister of ONE champs Angela and Christian Lee.

In the main event, ONE strawweight Muay Thai champion Sam-A Gaiyanghadao will put his title on the line against Prajanchai PK.Saenchai Muaythaigym. For MMA fans, meanwhile, “The Burmese Python” N Sang (26-12, 1NC) will stand out, as he looks to shake off back-to-back title losses to Reinier de Ridder. N Sang will be up against Brazil’s Leandro Ataides (11-4), also coming off a loss to de Ridder.

Teenage sensation Lee (1-0) will be making her sophomore appearance in the ONE Championship cage. She’s been paired up with China’s Wang Luping (3-2). Also in action, Indian atomweight star Ritu Phogat (4-1), who will attempt to bounce back from the first loss of her MMA career earlier this year, to Bi Nguyen. Phogat has been matched up with Lin Heqin (14-2-1), who sits on an eleven fight win streak.

The entire ONE Championship: Battleground card can be found below. The event takes place Friday, July 30 at the Singapore Indoor Stadium in Kallang, Singapore. No fans will be allowed to attend the closed-door event due to COVID-19 protocols. 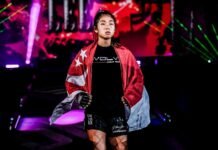 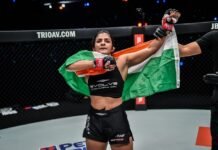