PHOENIX, AZ – While it hasn’t been officially announced, Lauren Murphy vs. Joanne Calderwood might just determine who the No. 1 contender at flyweight is, and who will face Valentina Shevchenko next. Murphy doesn’t necessarily think that is the case, but would love to think so.

Currently on a four-fight win streak, Murphy was asked point-blank on Wednesday at the UFC 263 media day if she believes she’s fighting for a title shot.

“I think it all depends on what happens Saturday night like, it depends what happens with my performance,” Murphy replied. “If me and ‘JoJo’ go out and just have a fight where we look at each other, then, like, no. It has to be a good performance.”

Murphy (14-4) is riding that four-fight win streak and is ranked No. 3 in the flyweight division. She went 3-0 in 2020 with wins over Andrea Lee, Roxanne Modafferi, and Liliya Shakirova.

It would be hard to pass up Murphy if she were to get a win on Saturday and she would love to think she’d get it.

“I think, you know, I would love to say it’s a number one contender fight, I would love to say that, but I also know in this sport, anything could happen, so I could win this fight but come out with such an injury that maybe I’m sitting on the shelf for nine months. Or maybe I win the fight and Valentina gets injured, that’s what happened to ‘JoJo.'”

Watch the full UFC 263 media day scrum with Lauren Murphy above. The event takes place this Saturday, June 12, at the Gila River Arena in Glendale, Arizona. The main card airs live on PPV. 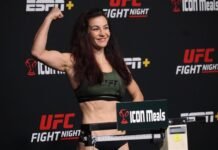