A pair of featherweight prospects will collide inside the UFC octagon this August.

MMA Junkie was first to report that Pat Sabatini will fight Jamall Emmers on August 28 at a yet-to-be-announced UFC event. Sabatini would confirm the booking via his Instagram Story.

Sabatini (14-3) finally made his long-awaited UFC debut last month at UFC 261. He defeated Tristan Connelly via unanimous decision and spoiled his featherweight debut. The long-time CFFC fighter is riding a three-fight win streak and captured the CFFC vacant featherweight in his last year against Jesse Stirn at CFFC 91 in December.

Emmers (18-5) got back into the win column in his last fight at UFC Fight Night: Brunson vs. Shahbazyan against Vince Cachero, defeating him via unanimous decision. Before that, “Pretty Boy” had his four-fight win streak snapped when he lost a split decision to Giga Chikadze at UFC 248 in his UFC debut. Emmers was supposed to make his third walk to the octagon earlier this year at UFC Fight Night: Blaydes vs. Lewis in February, but back spasms forced him to pull out of the fight minutes before the fight. His opponent Chas Skelly was already in the cage. 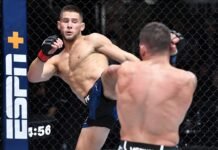 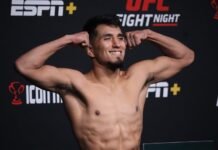 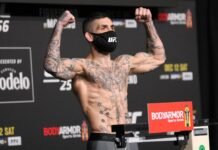