UFC on ESPN 24 has lost its hotly anticipated planned main event due to a cut.

C. Contreras Legaspi of Combate was first to report the news that former bantamweight champion pulled out his return fight with No. 2 contender Cory Sandhagen with a cut. Dillashaw would confirm the news with a post to social media.

“I’m sad to say that I have to be pulled from my fight on May 8 due to a cut received from a head butt while drilling. Rescheduling the fight as soon as possible,” Dillashaw wrote.

Dillashaw (16-4) was last in action against Henry Cejudo on January 19, 2019, on the inaugural ESPN + card. That night, he would try and become a double champion by attempting to claim the flyweight title. Dillashaw would lose in just 32 seconds via TKO. A few months after the fight, Dillashaw announced he was relinquishing his 135-pound championship due to a USADA violation stemming from a failed drug test. USADA would suspend him for two years for his use of EPO (or recombinant human erythropoietin). Before his loss, Dillashaw, in his second reign at 135lbs, had won four straight and defended his belt once.

No main event replacement has been announced for UFC on ESPN 24 as of yet.

As of now, the fight will take place at the UFC Apex in Las Vegas. With this last change, the Fight Night lineup on May 8 now looks like:

UFC: Diego Sanchez Out of May 8 Bout with Cowboy Cerrone 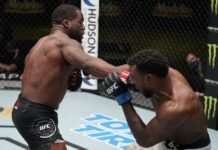