Jordan Young makes his PFL debut this Thursday at PFL 2 against Vinny Magalhaes.

Until recently, Young (11-1) had been with Bellator, going back to Bellator 171 in 2017. He went 6-1 in the promotion, suffering his first professional loss in his last fight, against Julius Anglickas, back in 2019.

He won’t let his first loss and the loss of his zero on his record deter him from his goal.

“You only get paid half your money when you lose — never excited to lose that zero, but that being said, sh*t happens,” Young said during the PFL 2 media day on Monday. “I’m in a great position to show my full skillset; I needed surgery after that fight, that’s neither here nor there. The kid fought a good fight to beat me, but I wasn’t at my 100% — I know that in my heart, so the loss doesn’t bother me, and I know what I’m capable of.”

Young was originally matched up with Smealinho Rama, but earlier this month, it was revealed that Rama had to withdraw from the tournament and was replaced by Magalhaes.

It is well known that Magalhaes is one of the best grapplers in the world. Young has nine submission wins himself, but he is planning on exposing his opponent in other areas. After being asked if he plans to get the submission win this Thursday, Young made it clear he has other ideas.

“Absolutely not. I’m going to show different skill sets in this fight, and, uh, Vinny would love for me to try and submit him but, he is absolute hot garbage in other areas of the game, and we’re gonna show that come Thursday.” 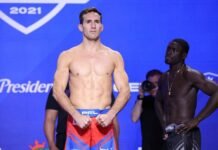 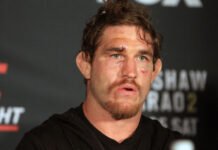