No cause of death has been revealed for Young. However, both American Top Team, where the light heavyweight trained, and the PFL confirmed the news on Sunday.

“Life throws challenges at you. I’m in a very saddened mood. Tonight 20 minutes before our fight and subsequent victory I got a call, that one of the fighters I currently did boxing coaching for had passed. I left the locker room quietly, found a dark corner room and I cried. I couldn’t believe it, I could hear his voice in my head. I stood in disbelief before I had to get myself together to do the job,” Santos wrote on social media, adding “I had grown fond of Jordan.”

“Like many of the fighters I coached, he fit the type of athlete I enjoyed working with, as I’m sure his other coaches did as well. We formed a sincere and respectful relationship. He was always so appreciative of the time I gave him. Always replied yes sir to any of my instructions, training advice or strategy talks. He seemed to be overcoming obstacles and I became just a fan of him and that in itself. Just a few weeks ago we talked about how excited he was for 2022, and that as soon as he took care of some injury he wanted to schedule getting right back to work with me. When he spoke to me I had such a good feeling for him, he was on such an upswing and positive vibe after an injury plagued career. I was really looking forward to seeing him have continued success after his last big win.”

A gifted prospect, Young started his career going 11-0. He’d begun training martial arts in his teens, he told Cageside Press in a 2018 interview.

Young most recently competed in October under the PFL banner, where he defeated UFC alum Omari Akhmedov in a stunning upset. In his Bellator run, which lasted from 2017 to 2019, he posted a 6-1 record, with his lone loss coming to future light heavyweight title challenger Julius Anglickas.

Statements from the PFL and American Top Team can be found below.

PFL is saddened to learn about the passing of Jordan Young. Our thoughts and prayers go out to his friends and family during this tragic time. May he Rest In Peace. pic.twitter.com/PsPAyOxy2y 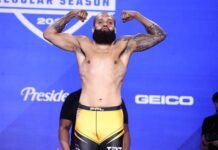