A pair of top ten UFC heavyweights will look to get back into the win column in June.

First reported by Marcelo Barone of GloboEsporte, No. 9 ranked Augusto Sakai will change opponents from Shamil Abdurakhimov to No. 6 Jairzinho Rozenstruik and will headline the June 5 UFC Fight Night.

Rozenstruik (11-2) is coming off a very disappointing main event performance against Ciryl Gane in February. He lost a pretty lackluster unanimous decision in that outing. Before that loss, he had rebounded from his knockout loss to Francis Ngannou by knocking out former UFC heavyweight champion Junior Dos Santos.

Sakai (15-2) tasted defeat for the first time in his UFC career last time out. In his first main event against MMA legend Alistar Overeem last September, he lost via TKO in the fifth round. Before his most recent loss, the Brazilian was riding a six-fight winning streak.

Both fighters need a win to keep their spot in the top ten.

With the latest addition of Rozenstruik vs. Sakai main event, the UFC’s June 5, 2021 fight card currently looks like this: 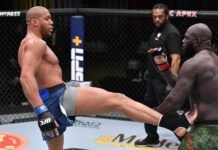